3CINNO as a solution-based LED display manufacturer was honored to have been involved in the DAU film premiere in Paris on 25 January 2019 with our advanced flexible led screen series, the flexible led mesh also named soft led curtain.

The production company, Phenomen Films UK asked us about the rgb led curtain project on  August 6th.  They want to catch up the planned premiere event in beginning of October. There were only 2 months left. But the client had no idea to choose which type led curtain and how to control the addressable led curtain.

At that time, there was only an initial design with many different size led mesh facades putting on the windows, balustrades, pilaster, columns,etc. on several landmark buildings.

1, Kinds of dimensions requirements about the programmable led mesh

The 1st challenge was how to design the led curtain screen to fit for kinds of dimensions. For controlling, the distance between the windows, balustrades,and columns was different. And the led curtains should be controlled together to play full or related image.

We tailor made different size led meshes to be closest to each size. The maximum cable length between two places was 100 meters. We put the main controller (the led screen processor) in one control room, and daisy chained all cables between different locations. We delivered the video content from the center room to all the positions, and the media could be uploaded and managed in one place easily. 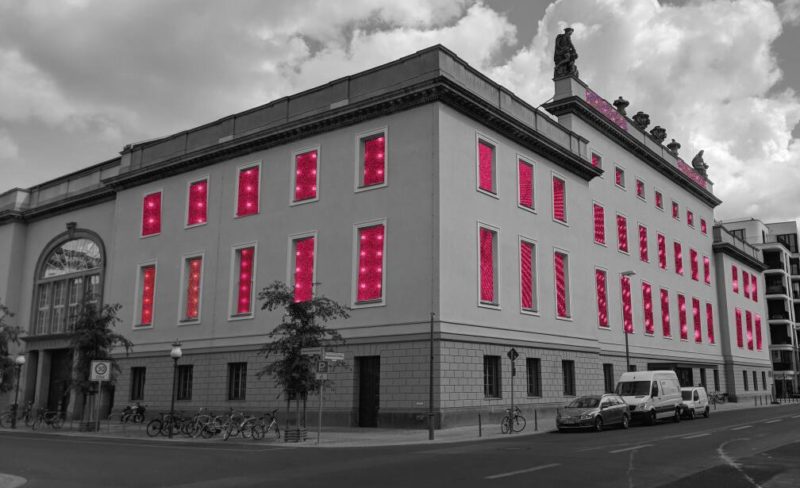 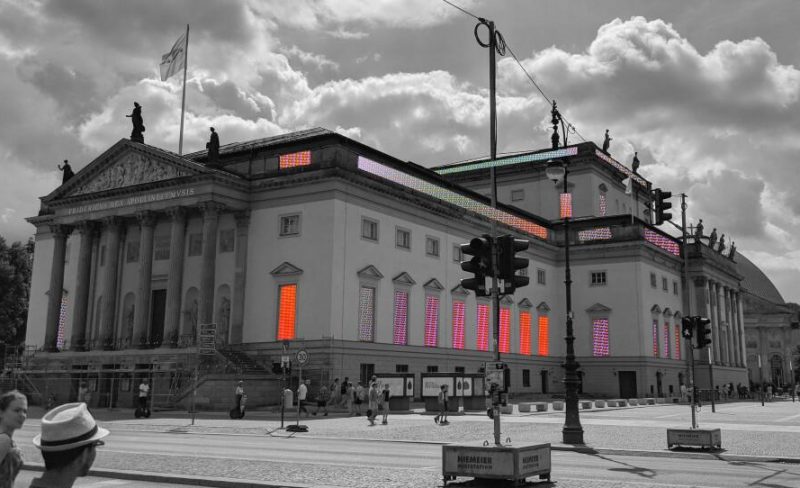 Higher resolution led screen requires more led pixels in one area, that would leave fewer space for the vacancy, naturally decreasing the transparency. It is also known that high brightness need more pixels. How to get a balance between transparency and definition,brightness was another challenge.

Based on our suggestion, and after sample test at site, the client finally chose the P56mm LED mesh which has 75% transparency. And with multiple-led dot led mesh, the video played on the LED mesh screen can be watched under day-time natural ambient light. Besides the multiple-led high brightness led mesh, we also provided cheaper single-led led mesh in some places that could show very clear image during night-time. It was important to mixed use two type led mesh screens to get best visual performance within the budget.

3, Not to damage the historic building

All the led mesh screens will be installed on the places of iconic historic buildings. After one month event in one place, the led mesh need to take off and move to another city, that was a touring event. Every installation and dismantling process can’t have any damage to the old buildings.

Because it was a flexible, very lightweight and foldable led screen. The high res led curtain could be hung with some stay bars and fixed on a simple frame on the buildings. Transportation also became very easy just by rolling them up. This type soft led curtain made all the handling process doable and saved much the transportation and labor cost.

After signed contract with the client, there wasn’t one full month left. We made strict agreement about delivery time with our client. We should finish 244,000 led mesh dots within one month and should deliver the 1st batch 123,000 dots one week earlier.

There was not any excuse to make delay and product poor products to catch up the time. Because it was definitely very must-do thing to get all well done according to the plan for our client, the branded Film Production company. What we have finally done was to send high quality led display products to our client without any delay to guarantee this important public event going successfully.

Background of the event,DAU Film Premiere (What was this led mesh project for) ?

The premiere was in the form of a dozen feature films screened inside an extensive around-the-clock immersive installation. This film is one of Russia’s largest and most controversial cinematic projects.

The preparation for the shooing for the film began in 2006, whereas the actual shooting started in 2008 and went on for many years. It was shot at various sites in Azerbaijan, Russia, Ukraine, Germany, United Kingdom and Denmark.

The world premiere of the film was intended to take place at the 2011 Cannes Film Festival but the film was not completed yet.

In July 2018, the project release and preregistration was opened, and the release was scheduled in October 2018 in Berlin (with similar happenings following in Paris and London)as a month-long, full time operating and immersive art installation.

The city ultimately did not approve the plans, as there was too little time for authorities to check for safety for an event of these proportions, with the production company having submitted the plans less than a month prior to the event

The project finally premiered in Paris on 25 January 2019 in the form of 12 separate feature films screened inside an installation evoking The Institute and spanning the Centre Pompidou and two municipal theaters, the Théâtre du Châtelet and the Théâtre de la Ville.

If you want to know more about this film, pls visit here: