A large-scale center-stage LED display plays a key role in entertaining, informing and engaging viewers. Both high-resolution performance and capability to fit creative stage design are expected from stage LED screen. For concert touring, LED displays that are easy to transport and deploy is always a necessity. As what we have already known, flexible LED display is one of the perfect options to fill that role in staging world.

Instead of a single fixed stage LED screen, more viewing dimensions were added to the stage using LED columns built by foldable LED display. At Mayday’s stage, foldable LED screens modules were configured into three-sided LED columns either arising from the stage bottom or down from the ceiling as a centering. Foldable, lightweight design made the deployment quick and easy. 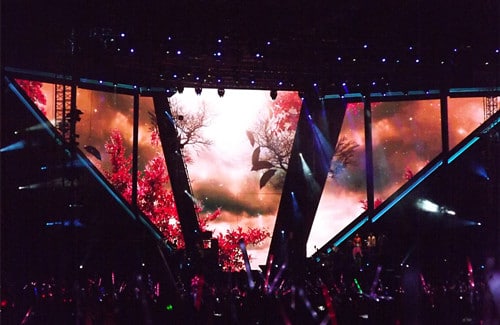 The stage LED screen at this tour features an inverted triangles consisting of custom-made freeform LED display modules. At both sides of the stages hung two rental displays in favor of audience sitting along the sides of the venue. To add more energy and excitement to the concert, the stage was designed in freestyle, not only the video content was engaging, a unique display configuration is also icing on the cake.